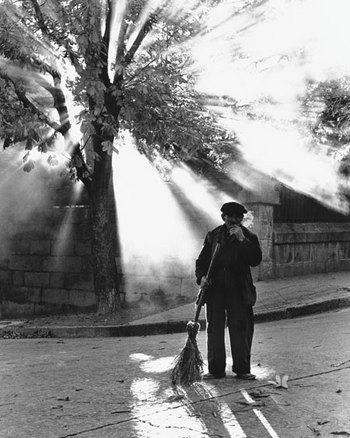 March 01, 2011 — “Only in America!” Three little words that were repeated by thousands of “greenhorns” (immigrants) at the beginning of the last century who were awed by the freedom and opportunities available in this country. The mantra became the title of a best-selling book by folk-philosopher Harry Golden. America’s melting pot produced hundreds of rags-to-riches sagas, immortalized by writers from Horatio Alger to today’s scribes. The immigrant experience defined America for many, and was symbolized by the beautiful Statue of Liberty on Bedloe’s Island (Now known as Liberty Island), welcoming them with freedom’s torch as they sailed into New York Harbor.

The story of Arizona’s Senator Barry Goldwater fits that legendary mold, except this descendant of Polish immigrants to America, carried a camera with him wherever he went. Photography, and his love of short wave radio occupied much of his spare time. Is it possible that his stormy political career may someday be a footnote to his photographic works? It seems far-fetched today, but stranger things have happened in the history of politics—and photography. It is fascinating to study the senator’s photographic legacy for clues to the man, but it may be even more fascinating to study the man for clues to his photograph. Whatever their artistic or historical merits, one can examine a photograph from diverse viewpoints and glean revealing nuggets and insights about the photographer. Subject matter, point-of-view, technical details and other factors can bring a photograph to life and illuminate not only the era in which the photograph was taken, but often the photographer as well.

When Goldwater’s grandfather, Michel Goldwasser, passed through Ellis Island he kept going and settled in Phoenix, AZ, area. There he founded Goldwater’s Department Store, which prospered and provided the Goldwater’s with financial security. Barry was born in 1909 and received his education at Staunton Military Academy and the University of Arizona.

Upon his father’s death in 1930 he took over the store and ran it until a decade later gathering war clouds erupted into World War II. Goldwater was commissioned into the United States Army Air Force reserves and became a pilot assigned to the Ferry Command. He spent most of the war delivering supplies and aircraft to the war zones, flying between the U.S.A. and India, and over “the hump” in  the Himalayas bringing supplies to the Republic of China. He learned to fly 165 different types of aircraft and retired at the end of the conflict with the rank of Major General. He became a strong supporter for the building of the Air Force Academy and served on its Board of Visitors.

His election as a Phoenix city councilman in 1949 began a 40-year career in public service. In 1952 he became a U.S. Senator, and soon thereafter a leader of the Republican Party. His generally conservative stance earned him the nickname, “Mr. Conservative,” although by today’s standards that might be subject to re-evaluation. For example, he was opposed to the military ban on homosexuals, noting that, “Everyone knows that gays have served honorably in the military since at least the time of Julius Caesar.” And, “You don’t have to be straight to shoot straight.” When the Reagan administration sold arms to Iran in 1986 he was outspoken in his opposition, telling newsman Robert McNeill that it was, “the goddamn stupidest foreign policy blunder this country’s ever made.”

In 1996, he supported an Arizona initiative to legalize medical marijuana. His deeply held and often passionately expressed political views gave him a reputation as a firebrand in the early years of his senatorial career when he befriended the notorious Senator Joe McCarthy. Throughout his career he never hesitated to say what was on his mind, bluntly describing Richard Nixon as, “the most dishonest individual I have ever met in my life,” and of Lyndon Johnson saying he “used every dirty trick in the bag.”

Goldwater is said to have been a key figure in forcing Nixon’s resignation during the Watergate scandal by threatening to remove him from office if he didn’t voluntarily resign. Since then the term, “a Goldwater moment” has been used when a member of Congress who also belongs to the party of the incumbent president votes against what the president wants.

Time mellowed Goldwater and he eventually attracted the friendship of legislators of all persuasions, among them Senator John F. Kennedy, someone he considered running against for president. Goldwater was grief-stricken when Kennedy was assassinated. He ran against Lyndon B. Johnson, losing the election in a landslide and carrying only his home state and five Southern states. He retired from politics in 1987 and it may be assumed he spent many happy hours thereafter on his favorite hobbies: short wave radio, (his call was K7UGA), and photography. During the Vietnam War he used the short wave setup in his Arizona home to patch in servicemen on the battlefield so they could talk to their families back home in the States.

Viewfinder on the Southwest
What kind of a photographer was Barry Goldwater? Take a peek at his photographs at www.barrygoldwaterphoto graphs.com, and you will find over 50 of them handsomely presented along with notes by Goldwater and members of his family. Although he took snapshots as a boy using his mother’s box camera, he began to photograph seriously when his wife, Peggy, presented him with an Eastman Kodak 2 ¼ x 2 ¼ reflex as a Christmas present in 1934—their first year of marriage.

Over the years he used a 4 x 5 Graflex, a Nikon 35mm for color shots and a Rolleiflex—he reserved for black-and-white shots—as an ideal combination that enabled him to have the right camera for any situation. Goldwater usually shot with a yellow filter to enhance skin tones and balance the brilliant Arizona sunshine. Most of the time his film of choice was Plus-X.

Readers of Arizona Highways Magazine soon became accustomed to seeing his byline under photographs in the magazine. The first color cover of Arizona Highways on the first all-color issue in December 1946, was a photograph Goldwater took of Navajo Indians. Ray Carlson, then editor of the magazine, asked him to get some pictures of Navajo’s tending their sheep in the snow. It was late February 1946. As Goldwater recalled the incident, “I told him he was out of his head, that it never snowed on the reservation in springtime. So I said I’d try to get something the next year. But as it happened, I was up at the trading post near Navajo Mountain the next week, and when I woke up one morning there was about two feet of snow all over everything. So I ran down the road about three miles and got my picture. Just what he wanted. But both then and now, I prefer shooting black and white.”

Ansel Adams, with whom Goldwater struck up a close, lifelong friendship, wrote the forward to Goldwater’s book, Barry Goldwater and the Southwest (1976). He and Adams exchanged many letters and original prints over the years. It may be assumed that he got some good tips from the master. He also admired the photographs of Edward Weston, who he liked to imitate, and considered him and Adams, “the best photographers we ever had.”

His photographs are technically accomplished, well composed (and nicely presented on the Web site). It didn’t seem that it was his intention to create art with a capital “A”. Rather, it seems to have been his aim to make a record of what he saw through his camera’s eye, as artistically as he could, to fix the scene as a moment in history. He approached his subjects, whether Indians or stirring landscapes, with respect—as is plentifully evident in his images.

The surprise ending to this tale of a Senator and his cameras is that Goldwater attributed photography to getting him started in his career in politics. Here’s what he had to say about it:

“I was the 70th person to ever go through the [Grand] Canyon [by boat]. I really think it’s what got me started into politics. I took moving pictures of the trip and I guess I averaged four times a week showing the picture all over the state. When someone suggested that I run for the Senate, I thought, well, if there is anyone in the state I haven’t shown these pictures to, I don’t know who they are. So I got into politics for that reason.”

When Barry Goldwater died in 1998 he left over 15,000 negatives to three institutions in Arizona. His politics will be sorted out and fussed over by scholars and historians for years to come. Now they have the added dimension of his photographs, a rich subject in its own right, to study the arc of his political career. Or to just enjoy them for what they are: a heartfelt endeavor by a complicated man to find the good things in his world and record them as he saw them, for the enjoyment of his family and friends—and for posterity.

Martin Elkort has been a photographer since age 10. He is a former member of The Photo League, and his photographs are in the collections of the Museum of Modern Art in New York City, the Getty Museum in Los Angeles and the Museum of Fine Arts, Houston. Elkort resides in Los Angeles, CA, where he continues to refine his craft.