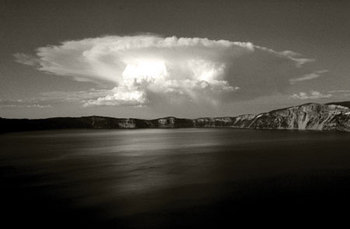 March 01, 2009 — A beautiful photograph, like a beautiful poem, always contains a mystery, an elusive and haunting nucleus that makes us return again to probe its depths, hoping to winnow yet another insight. The mystery is often in plain sight but its meaning may be obscured with the passage of time.

From the cave paintings of Lascaux to the photographs of Henri Cartier-Bresson, artists have always defined their societies, both in life and death, health and ruin. When the library of Alexandria burned down during the reign of the pharaoh Ptolemy, the only clues left of what came before were the magnificent sculptures, architecture and paintings of an endless line of forgotten creative Egyptians, Greeks and Romans laboring anonymously in the service of empire. Though the Egyptians left copious written records, nothing reveals the true nature of their subject matter more than the art that survived. From the beginnings of civilizations it has always been pictures, pictures and pictures that bring those eras alive and preserve them for future generations.

The very word photography means “writing with light.” So it seems, if a photograph’s contents are recognizable, it may one day become a visual recorder, a holder of the past. But such a grand responsibility shouldn’t bother a modern photographer seeking the right second to click the shutter. His concentration should be solely on the merits of the scenes that pass before him, be they the peeling paint of Aaron Siskind, the raffish characters of Weegee’s New York underbelly or the rocks and rivers of Ansel Adams’ beloved Yosemite. Take, for example, Alfred Steiglitz. He did not take photographs of horse-drawn trolleys on a foggy day to document New York’s transportation system, though with the passage of time, his photographs have assumed that historical quality.

The distinction is important, because when the task of recording a scene for posterity becomes a factor in deciding what and how to photograph, the photographer ceases to be solely a creative artist and enters into the position of documentarian. This is not to say that documentary photography cannot be art. It can be—see the work of Eugene Smith and Robert Capa—and often it is. But a photographer must first be something of an artist. The rest will follow.

And it does. The visual world is so rich, in fact, that it is possible for a documentary photographer to produce images passable as art, and for another photographer to find images taken purely with artistic intent as valuable to history. Brassai’s nighttime photographs of Paris are visual love songs to a city. With the passage of time they begin to shed light on a historic era.

“Sing me a song of social significance,” went a line in Pins and Needles, a Depression-era musical. And the photographers who were part of New York’s Photo League, started in 1936, (myself included) went out into the streets to capture visual songs that would move the world to improve the lot of common people. Idealism, not aesthetics, motivated many of us. Most Photo League photographers usually had no formal art training. They just picked up a camera and started taking pictures. Many succeeded brilliantly, their art evolving and maturing as they learned. The photographs of Lewis Hine, for example, were instrumental in the movement for the passage of workplace safety and child labor laws. Hine took his pictures to show how one third of a nation lived in misery and poverty. His pictures helped to change society, yet today his work is often regarded purely as art.

Indeed, the gritty pictures that came out of the Photo League were so unsettling to the Congressional witch hunters of that Red-crazed era, the League was put on the Attorney General’s list of subversive organizations. In a shameful setup, the League was blacklisted and photographers who belonged to it had to quit or risk losing their jobs. Faced with a massive loss of members, the League folded in 1951. Creativity and a sense of outrage against injustice are not handmaidens of autocrats. Congressman J. Parnell Thomas, who led the charge, wound up in jail for corruption while his disgraced senatorial counterpart, Joseph McCarthy, died in the Bethesda Naval Hospital from the ravages of alcoholism at age 48. This, of course, was coupled with the added loss to America’s culture—the loss of an organization that was a dynamo of creative photographic inspiration and whose distinguished members brilliantly contributed so much to photography and to society.

Creative photographers who go out into the world for inspiration are inheritors of a proud tradition of visual recorders that stretch into the distant past, beyond the invention of photography itself. And while this may sound like a weighty heritage, our job remains to take creative and wonderful images. Time, as always, will take care of the rest.

About the Images
The images used in this article are from several of the photographers who are members of the Los Angeles League of Photographers (LALOP). The featured photographers are Mark Indig, Sara Jane Boyers, Deborah Arlook and Angela Spieles. Martin Elkort is one of the founders of the organization.

Martin Elkort has been a photographer since age 10. He is a former member of The Photo League, and his photographs are in the collections of the Museum of Modern Art in New York City, the Getty Museum in Los Angeles and the Museum of Fine Arts, Houston. Elkort resides in Los Angeles, CA, where he continues to refine his craft.